Most of the record came to form during a muggy summer in Frederick, Maryland. A younger Jordan Romero wrote and recorded the songs on a newly purchased eight track Tascam tape machine, when he was not out working on a chicken farm or staying out late some smoky night. Teenager Speed catalogs youthful romance and mischief, and that familiar adolescent bewilderment, that of a thoughtful young person approaching a daunting and convoluted adulthood.

Much of Romero’s production in this album hinges on the sonic character of the tape machine, it’s just a good warm coat for this coldhearted digital age. It is as if all the artifacts of the recording are revealed as instruments themselves, seemingly as intentional as the notes Romero plucks out on the guitar or the drum machine played by hand in songs like Dirtbike and Blighted. All the music seems to reach you from across a great gurgling dreamscape.

The songwriting has all the classicality of a car radio left on in his parents’ heyday, yet it still very much rings of Romero’s own time. The melodies and arrangements fall into funked-up familiar forms where all structure has some odd passing recognition. In It’s Vacation we’re listening to something like the madness of a Beach Boys track through a dirty window in a dark house, with Romero directly summoning their ghosts, incanting the refrain “catch a wave”. Somehow all the songs seem to be a hyperactive fount sourced from the enormous catalog of records Romero has ingested since he was a child. As if we have plugged an old RCA cable in his ears are listening to the memories of songs he loves in stereo; in this record we have them on a dirty tap.

The process of recording itself configures Romero’s songwriting and speeds it along to a masterful pop meltdown of classic themes and structures, as if Romero was hoping to memorialize the best summer of his teendom, a summer of weird sex and trips to the beach and strange girls peddling dirt bikes down dark roads. Teenager Speed is a piece of history and marks the end of The Shy Violet project. In many ways it is both epilogue and prologue. Here we have an earnest farewell to a period of time in Romero’s work, as well as a foundational overture for the music he is now writing and recording under his given name. Furthermore, this record is evidence that, even when green and wet behind the ears, Romero has always known what obsesses him about songwriting and recording, and has always known all the clever turns to take down such familiar roads to get to the scenic route. He must have just been born with it. 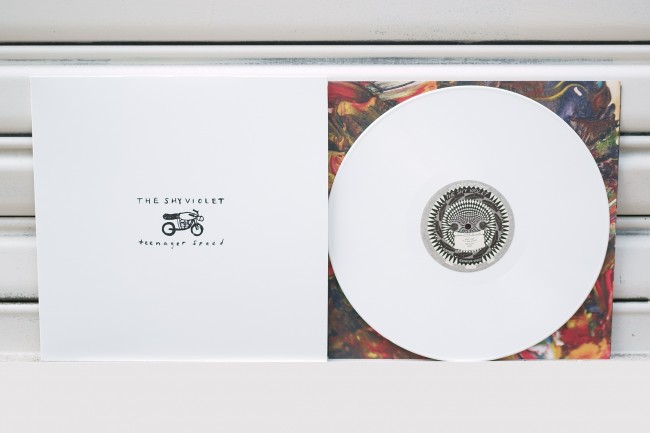